Sources
Principals
The ideas brought from academic research into public discussion by these principals are supplemented by others on the Links/Tools and Articles pages. 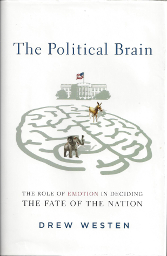 2007: The Political Brain is a groudbreaking investigation into the role of emotion in determining the political life of the nation. For two decades Drew Westen, professor of psychology and psychiatry at Emory University, has explored a theory of the mind that differs substantially from the more "dispassionate" notions held by many cogitive psychologists, political sciientists, economists—and Democratic campaign strategists. The idea of the mind as a cool calculator that makes decisions by weighingh the evidence bears no relation to how the brain actually works. When political candidates assume voters dispassionately make decisions based on "the issues," they lose.... 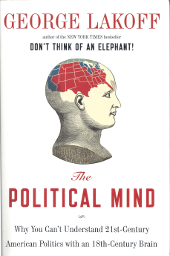 2008: One of the world 's best-known linguists and cognitive scientists, George Lakoff has a knack for making science make sense for general readers. In his new book, Lakoff spells out what cognitive science has discovered about reason, and reveals that human reason is far more interesting than we thought it was. Reason is physical, mostly unconscious, metaphorical, emotion-laden, and tied to empathy-and there are biological explanations behind our moral and political thought processes. His call for a New Enlightenment is a bold and striking challenge to the cherished beliefs not only of philosophers, but of pundits, pollsters, and political leaders. The Political Mind is a passionate, erudite, and groundbreaking book that will appeal to anyone interested in how the mind works and how we function socially and politically. 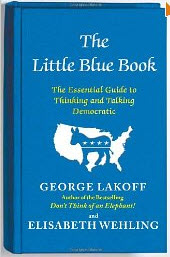 2012: "Voters cast their ballots for what they believe is right, for the things that make moral sense. Yet Democrats have too often failed to use language linking their moral values with their policies.
The Little Blue Book demonstrates how to make that connection clearly and forcefully, with hands-on advice for discussing the most pressing issues of our time: the economy, health care, women’s issues, energy and environmental policy, education, food policy, and more.
Dissecting the ways that extreme conservative positions have permeated political discourse, Lakoff and Wehling show how to fight back on moral grounds and in concrete terms. Revelatory, passionate, and deeply practical, The Little Blue Book will forever alter the way Democrats and progressives think and talk about politics. 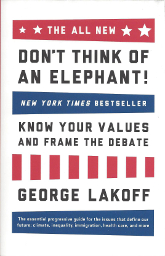 2014: Ten years after writing the definitive, bestselling book on political debate and messaging, George Lakoff returns with new strategies about how to frame today's essential issues....
The ALL NEW Don't Think of an Elephant! picks up where the original book left off—delving deeper into how framing works, how framing has evolved in the past decade, how to speak to people who harbor elements of both progressive and conservative worldviews, how to counter propaganda and slogan, and more....
BUY IT! 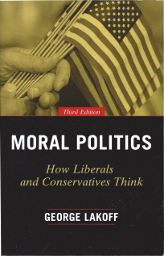 2016 (3rd Edition): When Moral Politics was first published, it redefined, through the lens of the brain and cognitive sciences, the largely unconscious basis of the political divide in America. Politics is about morality. Our deepest moral worldviews define our identities, and we vote based on our identities more than on our interests. When confronted with facts that don' fit our moral views, our brains automatically and unconsciously ignore or reject the facts.
Idealized family values—nurturant parent family values and strict father family values—define different versions of morality, pitting progressives against conservatives on almosst all major issues and giving rise to opposing versions of political ideas, from freedom to responsibility to markets. There is no political middle, no ideology held by all moderates. Public political discourse, not conversant with the brain and cognitive sciences, leaves out all of this.
For this new edition, George Lakoff has extended his observations to major ideological conflicts since the book's original publication, from the Affordable Care Act to the wars in Iraq and Afghanistan, the recent financial crisis, and the effects of global warming.
Other Sources
This source is important enough that it's in two places (also under "Articles"), so you won't miss it:

"Story Time: The Lost Art of Democratic Narrative." By Robert Reich, The New Republic, March 28, 2005. (This article is not easily found online, so copies in two formats are archived on this site: reformatted magazine image)
The Shock Doctrine: The Rise of Disaster Capitalism, by Naomi Klein, was published in 2007. To understand the ultimate goals of laissez-faire capitalism (capitalism with no rules, distinct from the regulated capitalism in the U.S.), the damage inflicted internationally where it has been imposed, and its fundamental conflict with democracy, read comments on the book here, then read the book.

An example of and one response to the ideological assault described in The Shock Doctrine lies in an article by Naomi Klein, "Capitalism vs the Climate" in The Nation, 11/28/2011 edition. "Denialists are dead wrong about the science. But they understand something the left still doesn’t get about the revolutionary meaning of climate change." (A PDF version that you may mark up is here.)
Bits & Pieces...
The Magical Number Seven, Plus or Minus Two (...why we DON'T want long, laundry lists of policies....)
Revised 8/17/2017